Hashtags are a core part of the Instagam platform. If you know how to use them properly, they can be a massive driver of growth, traffic and followers. Problem is, most people don’t! Fear not – my article will explain how hashtags work (in 2019, not three years ago!), and how to do them properly. By the end of this article, you will be a hashtag expert and know more than 95% of people on Instagram (maybe 99%). Let’s get started!

Hashtags are a simple way to categorise and describe content on Instagram, in a way that the algorithm understands. Hashtags can be added to an image caption or an image comment and they are then related to that image. Hashtags serve two important purposes: they help Instagram understand your image, and they enable it to turn up in hashtag searches.

The first thing hashtags do is help Instagram (the platform, not the people in the company) understand your content. Millions of photos are uploaded every day, so the staff at Instagram obviously don’t have time to look at and categorise all of them. The technology actually looks at each image when you upload it and can figure out a lot by itself, but it also looks at your hashtags to help categorise your content.

This categorisation is subtle but quite important: Instagram is continually putting accounts and users into “buckets” or “categories” based on what people seem to be interested in. If it sees you always like pictures that contain cars and have hashtags like “#luxurylife” and “#bosscars”, it puts you into a “box” of “people who like fancy / luxury cars”.

So the more specific and accurate you can be with your hashtags, the better. These categories are important for determining the content that appears on your newsfeed and Explore page.

The other and very important hashtags serve is as a search tool. You can search on hashtags on Instagram. Doing so brings up a screen with rows of three pictures, sorted in an order that Instagram decides based on a variety of factors, including how popular those images are and how relevant it feels they are for the hashtag. It is important to remember that Instagram also scans the picture and knows basically what is in it. So if you take a photo of a cat and put “#jetplane” in the caption, it will struggle to turn up in hashtag searches there, even if it gets a lot of likes.

It is therefore in your interested to try and choose hashtags that are relevant for the image you upload.

What kind of hashtags should I use on Instagram

For the best results, you should use hashtags that are relevant to your account niche (Instagram is constantly trying to figure out what “niche” or “subject” each account is in), relevant to the audience you are trying to target, and relevant to your image. A common mistake is just to throw in a few random very popular hashtags, in the hope that your post ranks for these popular terms.

Don’t do that! This is a mistake for a number of reasons.

It doesn’t correctly identify your photo (and Instagram will probably figure that out), it doesn’t connect to the right audience, and those terms will be too popular for you to rank for.

There are also strategies around how popular those hashtags are, in terms of their usage and how much engagement they are getting. I describe this in more detail below.

How many hashtags should I use

Instagram limits you to 30 hashtags per post. However, I do not recommend using all 30, especially not consistently. Nobody knows for certain but it is believed that Instagram doesn’t like people constantly using all 30 hashtags. They probably feel it is spammy behaviour to do that consistently.

Another reason not to use all 30 is that the number of hashtags “dilutes” the power of each individual one. So if you have 10 hashtags, you are ranking for less terms, but each hashtag gives you more power on each term. This is in fact why you sometimes see big experienced accounts only using five or six hashtags on a post – they are really trying to rank for those hashtags.

In fact, research has shown that between 10 and 20 hashtags gets the most exposure and impressions. That is therefore what I do and recommend.

Where to put hashtags

Hashtags can be put either in the caption or in a comment on the picture. I like to put hashtags in the caption, but separated by a few lines of empty text (use full stops or periods to create blank lines in Instagram – actual carriage returns are collapsed by Instagram so won’t count as separators).

There doesn’t seem to be any clear advantage either way, but I don’t like having to remember to rush and add hashtags in a comments. I like to put as much as possible into the one caption and post, so that’s what I do. If you really want to add them in a comment, you can.

How to do hashtag research

There are three tools you can use to do hashtag research. Instagram, Display Purposes, and Hashtastic.

Instagram itself gives you some hashtag data. If you search for a hashtag, it will show you how many posts there with that hashtag. This gives you a pretty good idea of the popularity of that hashtag, and therefore the difficulty of ranking for it.

It is not a very helpful interface though.The only benefit of it is that it will auto-suggest hashtags based on the one you have currently typed in. E.g. if you type in “marketing” it will suggest things like “marketingplan” or “marketingagency”. However, it will not suggest many terms that are related but don’t have marketing in the phrase, e.g. “salesplan”. This limits its usefulness.

There is a free website called Display Purposes that can be useful for hashtags. It doesn’t show you popularity or difficulty, but it suggests similar hashtags. So if you type in #marketing, it will give you 20 to 40 hashtags related to that term. This can be useful for coming up with your hashag rotation groups (see below), but there is not data shown for them, so it will be hard to judge their relative difficulty for ranking. 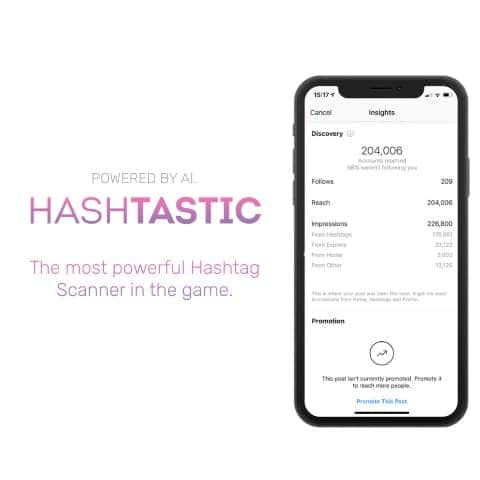 Hashtastic is probably the best hashtag tool out there

This is the best hashtag research tool I have ever found. It is quite complex, and its features and how to use it are way beyond the scope of this article (it would be a whole article or course in itself). But if you are serious about hashtag and want to construct proper groups of bracketed hashtag ladders, there is no better tool in the world than Hashtastic.

What size hashtags should I use?

Most people rank hashtags in terms of difficulty, and that difficulty is based on the volume of the hashtags.

Instagram publishes data on how many posts have been made using that hashtag. For popular ones like #love or #instagram, there are hundreds of millions or even billions of posts. For more unusual or “long tail” hashtags, there are far fewer – a few thousand or a few hundred.

Most people choose very popular hashtags, thinking they will get ranked and get a huge amount of traffic.

The problem with that is that everyone is doing that – making that strategy a bad idea. If you are up against literally billions of posts with #love, what are your chances of being at the top of the search? Nothing.

I therefore recommend using long to medium tail hashtags with a volume of between 10,000 and 500,000. This will give you the best balance of volume and ease of ranking.

Instagram doesn’t like it if you use the same hashtags over and over again. But if you are supposed to use 10 to 20 hashtags per post, and not reuse them, what’s the solution? It’s simple: you need a lot more than 10 to 20 in total. You need to keep changing them around. This is called hashtag rotation.

What I do is create file in the Notes app on my phone, and dump my eight groups of hashtags there, separated by fullstops. When I do a post, I pick a group of hashtags and after I have used it, I place a marker (like a $ symbol or something) to show that I’ve used it. Put this in the Notes file, not the hashtags you put on your post!

Then the next time I do a post, I check which group I used most recently (by looking for the marker. Then I remove the marker, copy the next hashtag group to the clipboard, and put a marker on the group that I have just used. And so on.

So to summarise, the process is:

These are more advanced concepts that I will explain in my upcoming course on Instagram growth and monetization, tentatively titled Instagram Elites. Please join the waiting list and be the first to be notified when the course is available!

I also recommend trying to make the hashtags specific to the actual post.

To do this, after you have pasted in your hashtag group, have a look and a think about your post.

Remove two or three hashtags that are least relevant to the current post. For example, if I am doing a post about sales skills, I might remove hashtags for videomarketing and entrepreneurlifestyle (though there may be other posts that would be very relevant to those).

Then I add two or three hashtags that are super relevant to the post. These should be ones that you choose on the spot, NOT pulled in from your hashtag rotation groups!

To continue the sales skills example, I might add hashtags for salesskills, salesguru and salescoach. Instagram will sometimes show you the volumes for these but sometimes won’t (and just shows someone who is following those hashtags, which is very annoying).

Try to choose hashtags with volumes between 10,000 and 100,000. If you are using ladders (see below), you might want to select different volumes for each of these ad hoc hashtags.

Feel free to do remove and/or add more or less than two or three of these ad hoc hashtags. But I would advise against going below five or above twenty-five hashtags.

The secret to real, powerful growth from hashtags is in an advanced concept called Hashtag Ladders.

This is a complex strategy that I will go into in detail in my upcoming Instagram course, Instagram Elites. You can join the waiting list here and be the first to get the course when it is available. Everyone who gets the course from the waiting list will also a receive a free bonus course.

That is all the core concepts of hashtags explained. I hope you liked this article! Do you have any more questions about hashtags on Instagram? Please let me know in the comments below!

The extraordinary story of Jon Morrow